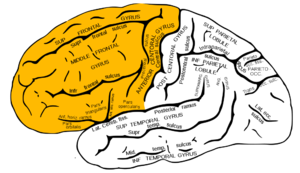 Frontal Release Signs are primitive reflexes that, when seen in adults with dementia, are indicative of disorders that affect the frontal lobes.

We will discuss each one of these in more detail.

The bottom line is if any of these reflexes re-emerge, there is suspected frontal lobe deterioration.  Researchers are trying to connect the severity of each abnormality to the stage of dementia.  Anecdotally, there is plenty of logic behind that theory.

But what does that mean for caregivers?  What does it mean for physical, occupational, and speech therapists approaching dementia treatment options as geriatric clinicians?  Should we add pediatric rehabilitative principles into our tool kit.

Previous: Aw Shucks…
Next: Brian Asselin: I Will Remind You